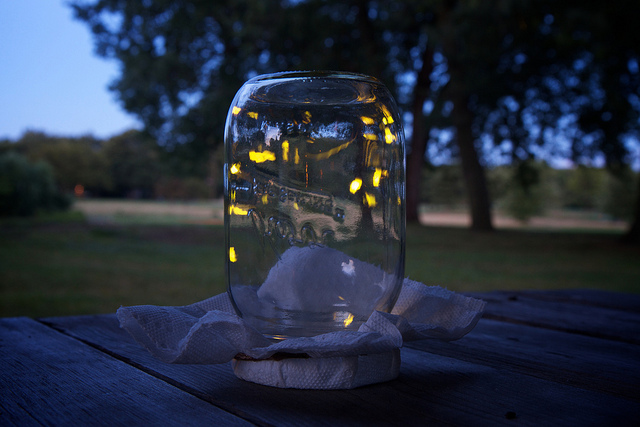 “The innocent and the beautiful have no enemy but time.” – William Butler Yeats.

On the longest day of the year, my mother celebrates her birth. This season in June is marked by red-ripe Michigan strawberries, sugared and macerated on homemade biscuits, and dusky evenings filled with fireflies. Tucked in my mind, under photos that make various memories congeal together, is my mother’s 40th birthday. The whole family, including grandparents, aunts, and uncles, gathered for a picnic in the park.

I was nine, wearing turquoise corduroy culottes and pink-and-white saddle shoes. I had just started to notice my crooked teeth and the silky blonde hair on my pale un-sunned legs. Though it was 1992 and eyeglasses were starting to shrink considerably, my mother still wore large 80’s-style ones that covered half of her face. I always wondered if her cheeks needed to see too. She also donned a hand painted t-shirt she made at the craft store during a night class she had taken earlier that year. In that moment, I had no concept of whether she was cool or not. She was simply my mother and her lap was still a perfect fit for me when I curled up my legs. She still called me her little “monkey-shine”.

After gorging ourselves on ham sandwiches, watermelon, and perfectly prepared potato salad, it was time for gifts. Aunt Laveda pulled a wet washcloth from a ziplock baggy to wipe down the plastic tablecloth. Four or five packages were set on the table in front of my mother, each box meticulously wrapped with grosgrain ribbon bows that could easily be slipped off and reused for next time. This was before gift bags existed, or at least before anyone in my family considered buying them. I sat close to my mother in case my assistance was needed with any present opening.

To celebrate her fourth decade, Grandma and Grandpa Parker were going to take her and my father on a Royal Caribbean cruise. It was the big gift that didn’t need any wrapping paper. Naturally, all of the other gifts that year were nautical themed. Blouses with bright tropical fish patterns, flouncy shorts with gold anchors for buttons, and a new swim suit that was navy blue with white trim. I must have missed the memo because my present was a package of clove-flavored gum and a Mars bar, two of her favorites and all I could afford at age nine. Despite this notable disconnection, I was quite pleased with myself.

Next Happy Birthday was sang joyously over a piece of strawberry shortcake with a wax “40” candle shoved in the top. After listening politely to the adults chat for a bit, my brother, sister and I escaped to the playground. The light grew dim as we swung on the swings and rode the big metal animals that stood on coils but hardly moved, even with the strongest of efforts to get them to rock. We successfully slid down the slide with a perfect dismount before the puddle of water that resided at the bottom. Still too chilly for mosquitoes, we played easily and carelessly till the sun disappeared.

Across the grassy park, fireflies began to dot the air. We ran to catch them, only to discover nothing but empty air. Being experienced hunters, we stood very still, knowing that soon, a dark, slow insect would float before our eyes. They were the laziest bugs in the world and the easiest to catch. You could slowly lift your hand and give them a gentle bump, which caused it to trustingly rest on your hand. Some people would smash them to see it streak on the pavement. But I only did that once because I realized how unsatisfying and rude it was.

Eventually we navigated our way back to the adults by the light of the street lamp that was near the picnic table. In a lawn chair, with his curly mullet and giant glasses like my mother’s, lounged my father. His mysteriously tan legs were crossed at the ankles and his chubby large fingers were intertwined on his stomach. I grabbed his hand and pulled, begging for him to push us on the merry-go-round. Reluctantly he retired from the adult conversation and followed the three of us kids to the dangerous toy. My sister and I took our places at the metal arches, wrapping our legs and arms around them. My brother bravely sat right in the middle.

With his tree trunk legs and big-boned strength, my dad began running in a circle. He went round twice and set us free. Then, with one hand in the pocket of his too-tight shorts, he kept the momentum of our spinning with a swift shove of his free hand on a pole he could catch here and there. Holding on for dear life, I let my head lean back to view the whirling world upside down. Fireflies flashed in streaks behind my dad, who chewed his gum detachedly. Though it was dark, I thought I caught a glimpse of a smile and was warmly surprised.

While most of my memories of my father are gray and shadowy, this one is flickery and vivid. It’s my first solid memory of having the very desperate thought of never wanting a moment to end, a very contagious feeling that I haven’t quite nicked. Nine (going on sixteen) was an age when I seemed to grow into a consciousness of being: the difference between moving along without thought, and “knowing better”. It’s the precipice between childhood and growing old, when you notice how surprised you were by the attention of your father.

In the midst of winter, I long for this season. For daylight that stretches past nine and fresh fruit picked from the local patch. But mostly I long for the days when I simply played, rather than analyzing my every step before I take it (and consequently, stand frozen in fear). Would I have tugged my father’s hand to come play if I had been more aware in that moment? If I had been more calculated, would I still hold one of my dearest memories of him smiling easily and free, a space of three years buffering him from news of cancer and chemotherapy?

You know what they say, you can’t uncrack an egg. Actually, I’m not sure that anyone says that. But I’m saying it now. I can’t look back on these memories without the layer of understanding that I have woven over the years. I can’t just live instinctually as I did when I was a child because I simply have too many years of over-thinking things under my belt. But I can try to look forward and step without thinking as much, to race to those fireflies and stand right in the middle of the tangible stars. I can still measure a person by the space on their lap and try to look out at the whirling world upside-down, in order to see the things that shouldn’t be forgotten. In fact, in these dark solstice days, I think we could stand to look at each other from a different perspective. Remembering the light of summer and the surprising warmth of a smile.