My husband and I don’t agree on everything politically or socially. On most issues, we are like-minded and we cheer each other on. But on some, we argue about things (or if you ask him, we discuss them) on a regular basis. And you know what? It sucks to disagree. It would feel so much better to have the person you are committing to love and cherish all the days of your life saying, “Yes, honey, I completely agree!” all the time. But we don’t…and that leaves some conversations a little unfinished and uncomfortable.

One thing we can agree on is that something this time around with our new presidential administration is different. And that different is more bad than it is good – which leaves a spectrum of possibility for our future ranging from “just a little fucked” to “royally fucked”. And within that space, I am unsure how to navigate my world. I do not have the political knowledge that I probably should. I have vague recollections of my high school Government class but it’s spotty at best. (It didn’t help that the answers to the questions on the matching section of the test spelled out a word when you finished. They were more like a crossword puzzle than proof of my solid political understanding.)

And so every day I am searching my phone like an addict – scrolling through articles that predict the fall of our great empire and liking posts (but not necessarily sharing posts) that tell me I’m not alone. All to find some solace in a very anxiety-filled and unpredictable time. Most of this happens in a fake little digital social-world that I wake to in the morning and say goodnight to at night. On Facebook, I seem to have created a cushiony community of like-minded friends who make me feel good about my beliefs. It makes me feel like the majority of the world thinks like me! Though I know this is not true because, scrolling on his phone next to me, is my husband with a very different newsfeed and headlines.

Aside from the very obvious issue I have with social-media addiction, (Are therapists starting to see people about this yet? Would I be the first to admit I have a problem?), there is another one I realize I need to address. I really don’t like it when people have different beliefs than me. The other day I hid someone’s posts from my newsfeed because they disparaged Beyonce. So you can imagine what this means for friends who I disagree with politically. When it comes to disagreement, I am very much flight and not an ounce of fight and Facebook has offered a very handy tool to aid me in my avoidance of discomfort.

More and more since January, when I watch politicians talk on the news or hear family members say things that feel offensive, I find myself searching for a “hide” button. How can they believe that? I think, in exasperation. But if I am being honest, I usually add the word still to the end. Because, once upon a time, before Facebook and Twitter and whatever the kids are doing these days, I thought very differently than I do now. I voted differently, I discussed differently, and I fought differently. If the now-me and the then-me ever met, we probably would not be friends.

It’s hard to pinpoint the actual impetus of my changing beliefs. There are the vague generalities of growing up and some distinct memories of the first tinglings of metamorphosis. I guess you could say it began with the start of college, in which I emerged from a very small, sheltered community and joined a very large, secular world. I found myself surrounded by people who thought very differently than me. Change didn’t come immediately. In fact, I rooted into my belief system more deeply than I ever had before. It was a stubborn and passionate time in which I clung to my past and the friends who thought the same as me. I did a lot of arguing and judging then, which led to a lot of crying from guilt and loneliness.

A year and a half later, I spent some time in South Africa on a study abroad. Along with the obvious cultural differences of the South African people that I met, among the other Americans I traveled with, there was not a single like-minded person in the group. Perhaps because I viewed this as an inevitable part of travel or maybe because I was alone on the other side of the world, I opened myself up to the discomfort of befriending people who think differently than me. It was prickly and anxiety-inducing but, mostly because I am very non-confrontational, I spent a lot of time listening to others and taking it all in.

I distinctly remember a moment of the trip, where I was all by myself, walking to the college campus we attended. A noise coming from the hill caught my attention and I looked up to see a man standing on the rooftop of the mosque and another on the roof of the Hindu temple right beside it. They both wore loose, white pants and a long, tunic-like top and their heads were covered in different variations of a white scarf. The two men, in an unrehearsed harmony, were calling prayers out over the hills. And the sound of their calls made my heart lurch.

When I returned home to my like-minded community, it felt like I was standing on fault lines and I feared the inevitable tremors that threatened my worldview. I isolated myself, wrote a lot of things in private while I said a lot of things out loud that didn’t really match my real thoughts. A heavy-footed question lurked in my mind,

What if I am wrong?

Fast forward ten years to a workshop I attended on Culturally Responsive Teaching at an education conference. When discussing how to change people’s belief systems, the presenters shared a theory by Chris Argyris, a professor of business at Harvard University. During his study of human thought and decision making in the 70s and 80s, Argyris developed an idea called the “Ladder of Inference”. And while only nerds might say something like this, that theory on human thought rocked my world.

Basically, it suggests that humans tend to hold on to the belief system that they have very tightly and self-select data to further reinforce that belief system. This is why two people can read the same exact thing and walk away with two totally different conclusions. And because this is, I’m sure, inadequately paraphrased by me, this illustration explains it better: 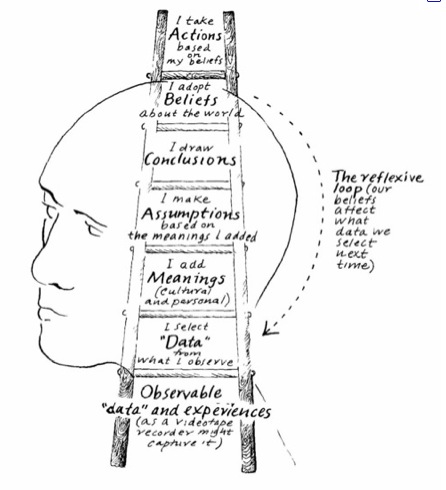 The presenters suggested that the only way to change a person’s belief, or to change your own beliefs, is to get out of the “reflexive loop” of ignoring data that doesn’t reinforce our worldview. In the context of education, this meant I needed to stop “throwing more data” at people in hopes that they would see it differently. Instead, I needed to create a space for people where they could safely ask themselves, “What if I’m wrong?” or “Why might someone think that?” Personally, I thought about the events that led to my changing beliefs. Through listening to and learning about people who thought differently than me, I was forced to pay attention to data I had been ignoring before.

I am not writing this to suggest that you need to change your beliefs. I keenly recognize that my privilege allows me to say “listen” because I have not been scarred by the system. And I want to be clear that the bigotry and hate that is being embraced right now is horrifying and decidedly wrong, with some people just not deserving of a listening ear. But there are people in our real lives (family, neighbors, friends) who we are isolating ourselves from because it feels uncomfortable right now. I don’t see any solutions coming from dividing ourselves any further. When faced with disagreement, instead of sticking my head in the proverbial sand, I am challenging myself to ask that scary, ugly question, what if I’m wrong and to ask others why do you believe that? It’s in this discomfort, we may actually see more and grow stronger in our beliefs.

I count myself lucky to have a partner in life that I don’t completely agree with all the time. Especially in a time where I am constantly bombarded with conflicting beliefs and actions by our governmental officials and leaders. I feel like this allows me to grow – not only because I have to consider the fact that someone I love and respect isn’t a complete heathen and, gasp, has another opinion. But it also helps us really check ourselves – where are we getting our information and can we recognize the details we are purposely ignoring in order to feel comfortable in our already established conclusions? I hope you have someone like this in your life too, who challenges you to think and question.

I know some people will read this and say, man that girl needs help. Yes, I know I do, thanks. You are much too well-adjusted to need my advice. But if you are having heart palpitations just like me and find yourself asking the universe, “what the actual fuck is happening?” on a daily basis then maybe you’d like to join me in my game plan to survive these trying times:

P.S. I recognize the irony in sharing a social-media warning via social media. That same irony was not lost on me when a man came to my door with a homemade “No Soliciting” sign and then proceeded to ask for a donation once he affixed it to my house. But, as a writer, I don’t know how else to process this conundrum. I write it out so I can really chew on it, then I share it in case my words might help someone else.